Current Issue Volume No: 7 Issue No: 1

The diabetic is most of the time admitted in emergency for acute complications. An inventory of these complications will guide promotional programs aimed at preventing the occurrence of these complications. This study was conducted with the aim of identifying acute complications and decompensation factors in diabetics admitted in emergency to the Souro Sanou University Hospital Center (CHUSS).It was an observational study, of descriptive transversal type, with prospective collection for 4 months. It concerned diabetics admitted to the medical and surgical emergency departments of the CHUSS. A total of 90 diabetics were included in the study. The average age was 58.81 ± 14.7 years. Type 2 diabetes accounted for 85.6% of cases. The diagnosis of diabetes was known in 74.4% of cases. The reasons for consultation were dominated by impaired conscientiousness and fever, 54.4% and 50% respectively. Metabolic complications were found in 44.4% of patients. They were dominated by hypoglycemia, which accounted for 55.3% of cases. Dietary error was the main decompensation factor in cases of hypoglycemia and was reported in 71.4% of cases.

Metabolic complications are common in diabetics admitted in emergency at the CHUSS. Decompensation factors are mostly preventable.

This is an open-access article distributed under the terms of the Creative Commons Attribution License, which permits unrestricted use, distribution, and reproduction in any medium, provided the original author and source are credited.

The authors have declared that no competing interests exist.

Diabetes mellitus is a major public health problem, due to its magnitude and numerous complications. It is estimated that 463 million, or nearly half a billion people, have diabetes worldwide, a prevalence of 9.3% among adults aged 20 to 79 in 2019 1. If this trend continues, by 2045, about 700 million adults, a prevalence of 10.9%. The largest increase will occur in regions moving from low to middle income 1. In the Africa region, more than 19 million people have diabetes. If left unchecked, this figure will increase by 143% by 2045, the largest projected increase compared to other regions1. In Burkina Faso, the results of the STEP-Wise survey for surveillance (STEPS) reported a prevalence of diabetes mellitus of 4.9% in 2013 2. Diabetes is taking a heavy toll on the world. The death rate is estimated at 11.3%, equivalent to 4.2 million diabetes-related deaths in 2019, in the 20-79 age group, or about 1 death every 8 seconds 1. Among the complications of diabetes, metabolic complications can be immediately life-threatening. These are acute complications, motivating the use of medical emergencies. To reduce them would be to avoid their decompensation factors. These decompensation factors could vary from one context to another depending on the habits and level of education of patients. Au Burkina Faso work on acute complications and decompensation factors of diabetic patients admitted to emergencies has already been conducted, in 1998 3, 2013 4 and 2021 5. But all these studies had taken place in Ouagadougou, in the Centre region. However, the cultural realities and the technical platform are different in the West of the country, of which the Sourou Sanou University Hospital Center of Bobo-Dioulasso, is the reference center. This study is the first of its kind in the context of BoboDioulasso. It aims to improve knowledge of these metabolic complications and decompensation factors. It will thus allow a better prevention of decompensations, in order to reduce the morbidity and mortality of diabetics in emergency. Thus, it seemed relevant to us to investigate diabetic patients admitted to the emergency departments of the CHUSS in Bobo Dioulasso in order to have strategies for guiding our awareness campaigns.

This is a series of prospective recruitment cases that took place from December 15, 2015 to April 15, 2016, a duration of 4 months. The study population was all patients admitted in emergency to the Medical Emergency and Surgical Emergencies departments of the CHUSS. Patients admitted to emergency departments (medical and surgical), diabetics known before admission or diagnosed with diabetes in the emergency department were included. The sample size of our study was calculated at 87 cases considering a prevalence of 6.2% in the Hauts Bassins region 6 and an accuracy of 5% with the following formula: n= (Z2PQ) /d2

Z (reduced normal) = is the coefficient to be used for the desired degree of confidence; z = 1.96 for a 95% confidence level

In total, the study involved 90 cases.

The data was entered and analyzed on Epi Info in its version 3.5.3. The comparison tests were made after verification of their validity criteria, considering a statistical significance threshold of p<0.05.

Among our patients, 81 patients or 90% of diabetics admitted in emergency had a complication. Thirty-eight patients, or 46.91%, had metabolic decompensation.

Hypoglycemia was the most common metabolic decompensation with a rate of 55.3%, followed by ketoacidosis (36.8%) and hyperosmolar coma (7.9%) (Figure 1). The mean blood glucose of patients with hypoglycaemia was 2.03 mmol/l and a standard deviation of 1.04 mmol/l. The most common reason for consultation in cases of hypoglycemia was impaired consciousness, found in 85.7% of cases. Cough was the second reason for consultation for diabetic patients admitted to the emergency room pour hypoglycemia (9.5%)." The majority of patients with hypoglycemia (72%) had a dual antidiabetic therapy combining biguanide and sulphonylurea (SHG), 14% were on biguanides or insulin. Patients on biguanide monotherapy presented their symptomatologies after taking alcohol for two of them, and after taking unspecified composition decoction for the other. Dietary error was the most encountered hypoglycemic decompensation factor (71.4%), followed by alcohol intake 28.6%, decoctions 9.5%. Figure 2

Ketoacidosis was found in 14 patients (17.28%), three (3) of whom were admitted by the Surgical Emergency Department. This is the only type of metabolic complication we have noted in this service. Of these patients, six (6) were not known to have diabetes (inaugural ketoacidosis). The mean blood glucose of these patients was 28.21 mmol/L with a standard deviation of 7.8 mmol/L and ketonuria ranged from 2 to 4 crosses. Fever was the main reason for consulting cases of ketoacidosis, 71.4%. Infection was the main decompensation factor in ketoacidosis cases, found in 57.1% of cases, followed by therapeutic breakdown in 49.9% of cases and dietary errors in 7.1%. Figure 3 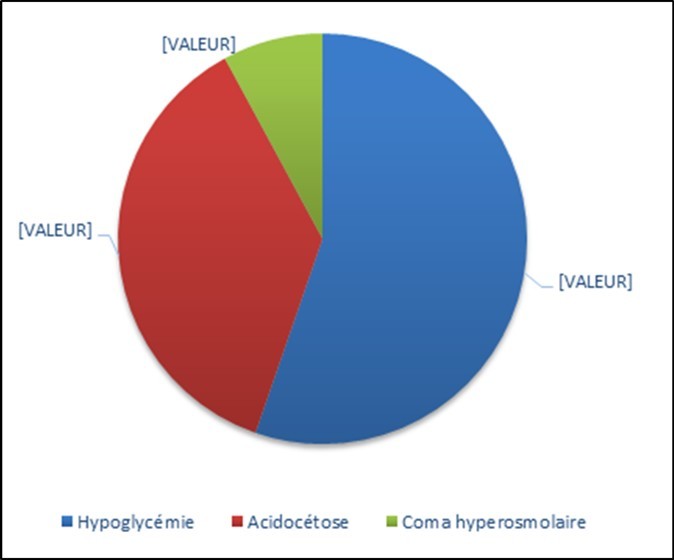 Figure 3. Distribution of ketoacidosis cases by reason for consultation 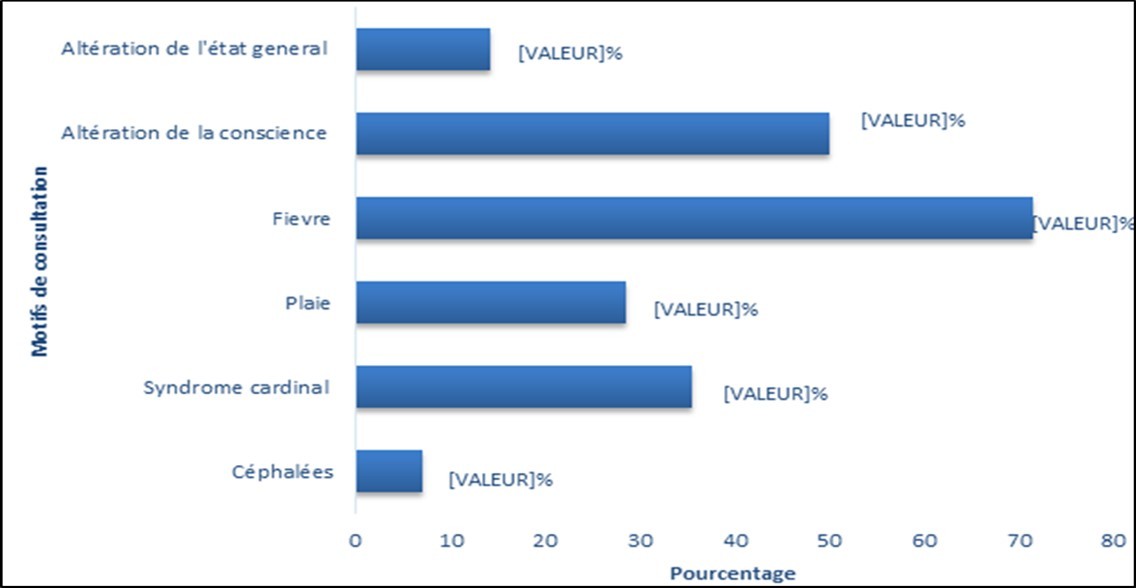 Hyperosmolar coma is a formidable complication, it was fatal to the three cases we observed, two were confirmed by the calculation of plasma osmolarity, the third died before carrying out the necessary additional examinations. Table 1